Youth find their jam in own businesses

Most 18-year-olds don’t cut up 400 punnets of strawberries in the middle of their HSC exams but Benjamin Burwood isn’t a typical year 12 student.

The Wahroonga resident, who runs his own jam business, is part of a new crop of enterprising young Australians who are launching their own food ventures and raising money for charity. By promoting their wares via social media and e-commerce sites, these budding food operators are putting a digital spin on the old-fashioned concept of the street-side lemonade stand.

Mr Burwood started making his own jam when he was 10, before he eventually starting selling by word of mouth, at school stalls, and via social media and an online shop.

The business has helpedMr Burwood cope with a genetic condition called neurofibromatosis type 1 and raised funds for charityMaryMacKillop Today to help children in Timor-Leste, where his mother was born.

‘‘[It was great] seeing the look on the little kids’ faces when we went to East Timor and gave them jam on bread because some of them had never even tried a strawberry before,’’ Mr Burwood said.

Originally published in the Sydney Morning Herald by Megan Johnston 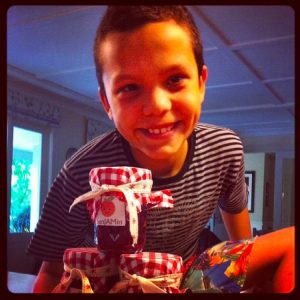 Young, smart and bringing in the dough

In Sydney, Wahroonga student Benjamin Burwood started making his own jam when he was 10 years old, before he eventually starting selling via word of mouth, at school stalls, and via social media and an online shop. The business – with the brand name BenJAMin – has helped the now 18-year-old cope with a genetic […]

AN 18-year-old’s own brand of strawberry and vanilla jam is hitting the shelves of Harris Farm Markets. Proceeds from each jar of Benjamin Burwood’s jam – aptly named benJAMin – go towards the education of more than 2000 students in East Timor. “I wanted to … give money to East Timor, because 50 per cent […]